I recently had the pleasure of attending a Japanese Green Tea Tasting event hosted by the Consulate General of Japan.

I’ll be honest, prior to this event I did not indulge in green tea for its taste, but for its health benefits over conventional tea and coffee. Learning of the complexity of Japanese green tea from Sommelier Ms. Michiko Ono, I’ve realized there is an entire spectrum of green tea that has not yet made its way to mainstream markets in North America. Watch out Tazo & Lipton! Japanese green tea farmed by cooperatives in Japan offer a tasty alternative and pack complexity in flavor.

Ms. Ono walked us through the different farming regions in Japan, their signature teas, flavours and cultivation methods. We were given seven different teas with pairings as shown below.

Canadians love cold drinks in spite of the weather, so why not sip on chilled green tea? I found this tea refreshing with fruity undertones. 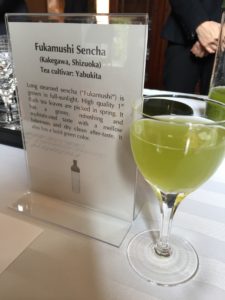 Organic practices can really affect the flavour of the tea and  lead to a difficult harvest. This tea is produced using traditional processing methods. 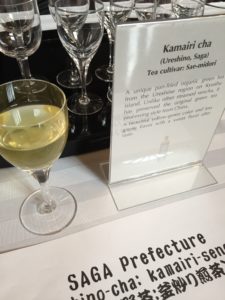 This is a very strong tea. The slightly bitter aftertaste pairs well with the earthy walnut dumpling. Delicious! 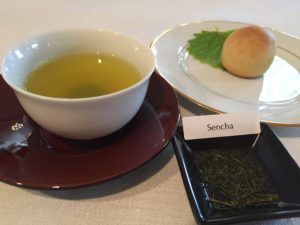 A very expensive tea due to its cultivation methods. It is a labour of love (with the emphasis on labour) to sustain a healthy crop of this tea all year. An incredibly risky crop to farm as it only has a 20 day harvest window annually. Don’t be fooled by the light colour, this tea is full bodied with rich vegetable flavours, amino acid, high chlorophyll and caffeine. Its flavours are brought out further by the acidity of the pickled Napa cabbage. Needless to say, this unique tea is quite expensive and should be savoured! 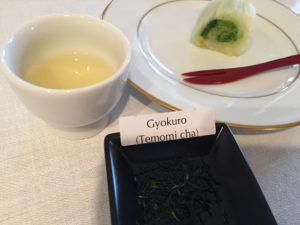 I have been drinking matcha ALL WRONG – the trick is the steeping method and the use of a bamboo whisk to create a frothy, creamy texture. Traditionally, matcha was only used for tea ceremonies. This tea was comforting and uplifting, especially when paired with the doughy sweetness of the white bean dumpling. I love that the chef combined Canadian & Japanese elements here. A higher caffeine content & great healthy nutrients will make this my go-to tea in the future. 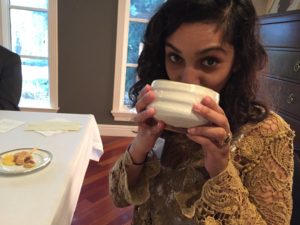 Despite the amount of caffeine I’ve consumed up until this point, this tea was calming and almost put me to sleep! A combination of earthy roasted flavour with mild caffeine makes for a traditional after-dinner (in my case, sleepy-time tea) that is often shared with children and is popular in the winter.

I also felt like a kid on the inside, trying the Deep Fried Brown Sugar Cracker – which is quite popular in Japan, and a favourite of the Deputy Consul General Yoshioka. 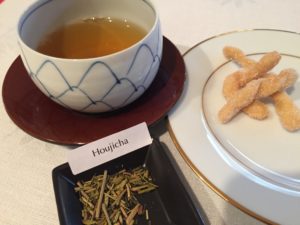 his tea is most often served at Japanese restaurants in North America and can be used in cooking as tea broth. I never thought to cook with green tea – but the pairing, Rice in Green Tea with Salmon proves this to be a fantastic idea! The toasted rice adds nutty flavours to the tea. Interesting fact: This tea is grown in a snow covered region. It is very subtle in flavour with no bitterness, making it a great ingredient for cooking or light broth. 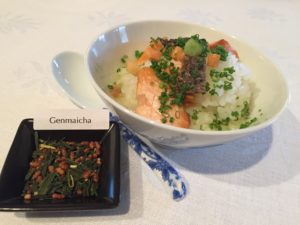 I appreciate our most gracious hosts the Consul General Tanabe, Deputy Consul-General Yoshioka, Ms. Ono and their team for organizing a very unique & exciting event and for the opportunity to participate. If you are inspired to learn more about Japanese green tea and where you can find it, please contact Ms. Michiko Ono, Japanese Tea Ambassador at michikoono@shaw.ca or the Consulate-General of Japan in Calgary at economic@cl.mofa.go.jp 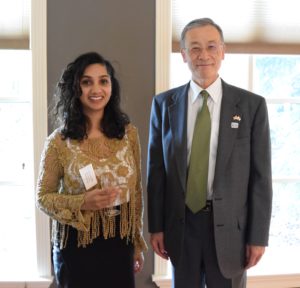 2017_10_Japanese Tea Tasting at the Consulate